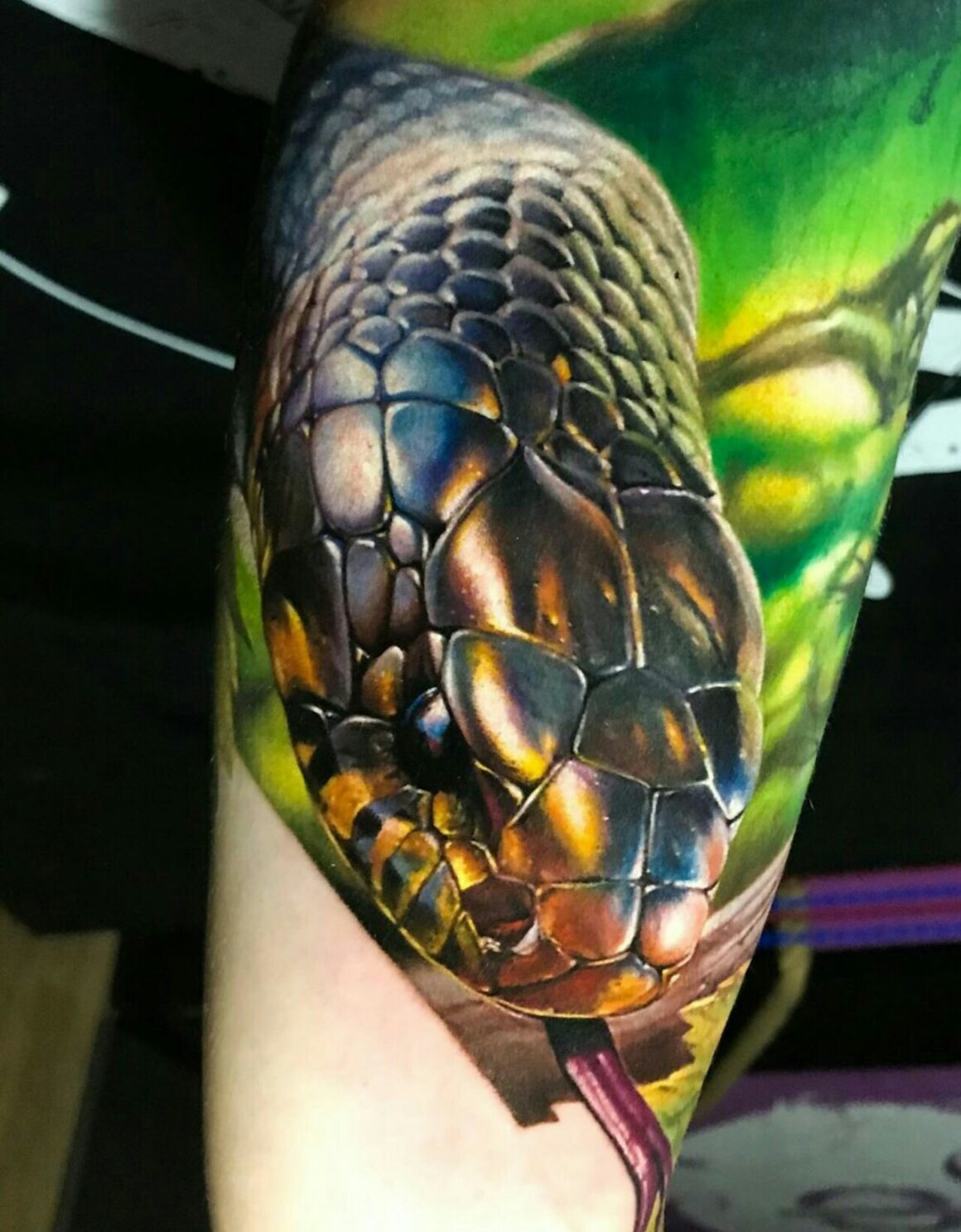 They are among the most popular subjects in every style of tattoo art, perhaps because ever since ancient times, these reptiles have exuded a particular (sexual?) energy and air of mystery. Let’s take a closer look…

The snake remains one of the most ancient and widespread mythological symbols, present in various cultures and associated with similar themes among peoples all over the world. Let us try to understand why.

It’s famous venom, for example, is often associated with the power to heal, poison, alter consciousness or an actual elixir of life. The way in which it sheds its skin also shows how this creature is the ultimate symbols of renewal and continual rebirth. So constant as to aspire to eternal life.

From a strictly symbolic viewpoint, the snake and dragon seem to be on the same wavelength since the venom of the one is glaringly similar to the fire breathed by the other.

Sometimes they are even confused seeing that the Greek Ladon or the Norse Níðhöggr are described at times as snakes and at others as dragons, creating all sorts of confusion. The same in China where the Indian snake Nāga is often equivalent to the Chinese dragon Lóng. The serpent-god Quetzalcoatl of the Aztecs, then, clearly has dragon wings, just like its twin in Mayan mythology (the famous “plumed serpent”).

In the Hebrew Bible, the famous serpent in the Garden of Eden tempted Eve, the first woman, with the metaphor of the apple and forbidden knowledge. Convincing her that, despite God’s warning, this transgression would not make her a mere mortal. The snake therefore, seen as a symbol of cunning or, depending on your viewpoint, persuasion of others through lies.

In the tantric tradition of Hinduism, divine energy resides in every person at the base of the spine. This power called Kundalini is often described as a sleeping serpent coiled upon itself, waiting to awaken with the aid of our consciousness.

This enormous energy possessed by the snake symbolises a hidden force, mysterious and dangerous. Very close to sexual energy, and ready, in the long term, to reveal its beneficial aspect. This symbolism of the snake as source of cosmic-divine energy was studied at length in the last century by one Carl Gustav Jung in his psychoanalytical books to better describe to the world the effects of what was known as the libido.

There are also plenty of examples of popular literature where the figure of the snake is described as a mere symbol of temptation. This is clearly the case, for example, with the character of the reptile described in The Little Prince by Antoine de Saint-Exupéry or the figure of Kaa in The Jungle Book. Immortalised by the Disney movie which was inspired by the adventures of Mowgli in the novel of the same name byRudyard Kipling.

In the Harry Potter saga which was such a success for J.K. Rowling, the figure of the snake is present as the symbol of evil associated mainly with Lord Voldemort and his followers. And then there is the snake Nagini, but even the Harry himself who uses the slithery creature simply to indicate his “dark side”.

Satisfied? Then enjoy our gallery focusing on the best tattoos devoted to the never over-analysed snake!

And if you are looking for some fresh ideas take a look at the digital eBook SNAKE by George Bardadim: VIEW NOW >>